I turned on the TV news. For once, the headline was not the pandemic but refugees walking north to the US from points south.
I am going to set aside my usual humorous look at life and get serious, since this is a very serious issue for Americans today.
I've read, with great dismay, the bigoted rants from many here. "They're coming to take our jobs! They'll get free stuff! They'll vote Democrat! They won't learn English! They don't look like us!"
Puh-leese. No. Just simply no. I have never read such idiocy in my life. It HAS to be coming from the retards (my apologies to the mentally disabled for the use of THAT old bigoted term) at Fox News. The ol' fair and balanced source of stupidity.
Let me start with the easy one. English. The United States has no official language. Or culture. Get that thought out of your head right now. We are a melting pot, and I for one celebrate that. I don't want to live where everyone looks and acts just like me. Yeah, like that would happen. You know what I mean.
What these migrant folks are, are people. Refugee people. People coming here to improve their lot in life. People leaving behind all they knew, friends and relatives they love, to seek a better life away from violence, civil war, a drug culture, and poverty. Some, like a few I've personally known in the past, are fleeing violence in their home countries and are running north to protect their families. One kid I saw on the news was ten years old, traveling all alone. His mom and or dad sent him away. Can you conceive of a parent resorting to such a desperate move?
Imagine being ten, like that one kid I watched on the news, and being told to walk north a thousand miles with just the clothes on your back with a few pesos in your pocket, and relying on the kindness of fellow travelers. Could you do that when you were ten? But he's coming here for our free stuff and to vote Democrat?
Now, Dave comes out, channeling Will Rogers.
The Jews fleeing WWII Europe came here for free stuff and that Hitler thing was an excuse. There was no potato famine in Ireland. Free stuff. Asians didn't flock here to build railroads. Free stuff. Columbus sailed here looking for free stuff. Lewis and Clark were looking for free stuff out west. Go back in time to Moses who wandered the desert looking for free stuff.
We are all on Facebook and the internet why? We're all looking for free stuff.
The US has a space program and we send rovers to Mars to search for more free stuff, since we're running out of free stuff here on Earth.
But seriously... those so-called Americans who think these refugee folks are coming here for free stuff should be absolutely ashamed of themselves. Vote Democrat? Most have no idea what voting means.
To quote a famous American, "Give me your tired, your poor, your huddled masses yearning to breathe free.".
I suggest moving the Statue of Liberty to El Paso.
Posted by Dave Gibson at 9:16 AM

Click on the photo for more info on Drift Away 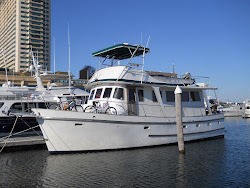 Dave Gibson
Waterford, NY, United States
Observations of an old man. You can follow our boat blog at trawlerdriftaway.blogspot.com and our Bleecker Sasquatch blog at bleeckermountainlife.blogspot.com.

She is somewhat unique in that the inside helm staion is on the main level, along with the galley and saloon. There is also a helm on the flybridge. The lower level has three staterooms, each with a full head, plus the engine room.

Drift Away sat on the hard for many years before we bought it from an estate. She has suffered considerably from neglect, but we are amazed at all the things that work, like the two Ford Lehmans, and the Naiad stabilizers. There was and is much work to do, but we will return her to ship shape condition. Eventually. As long as it doesn't interfere with having fun.